← Baniofla and Her Terrible, No Good, Very Bad Introduction to a Toubab

My twenty eighth birthday came and went with perfectly manufactured fanfare. My first two birthdays in Mali had been spent at the Peace Corps training center, neither of them under the most optimal of circumstances. I was a little nervous about spending a third birthday alone in village, but as soon as I returned, I knew I would never be ‘alone’ in village. I also quickly realized I was not going to eat toh on my birthday, and thus devised a plan: Yassa. Yassa is an onion sauce eaten over rice, generally with fish or chicken. It’s one of my favorites, and as I’d arrived at the tail end of onion season, it seemed like a good choice.

I asked Awa what it would take to eat rice that evening, and she was hesitant. To feed my whole family would require 27 kilos of rice (60 pounds), and just that alone would be around $16—far too much for me to spend on something as trivial as a birthday. “Why don’t you just have us cook a small amount of rice in the evening and then we’ll also make toh for everyone else so you don’t have to get so much?” But I was insistent. If I was going to have a good dinner on my birthday, so was my family.

Awa asked what people normally did for birthdays in America, and I said we generally ate a nice dinner and had cake. Cake, or gateau in french, exists in Mali as a distant relation to donuts. But at my mention of gateau, Awa insisted that we also make some for my birthday. It was a brilliant idea.

Word quickly spread that I was insisting on arranging dinner for the family for my birthday, and my first gift came early. One night about a week before the big day, I was sitting at Dubala while Hawa and Jenaba were susuing. My intentions to cook dinner came up and I was asking them what they thought I needed to get. Hawa said 30 kilos of rice (which Awa later refuted as WAY too much, we clearly only needed 27). Jenaba mentioned the tomatoes, the cabbage, the spices and things that could be bought in village. “But don’t buy onions,” Hawa insisted. I looked up and Hawa stopped her susuing. “Don’t buy any onions,” she said again, and Jenaba agreed, also repeating the phrase. 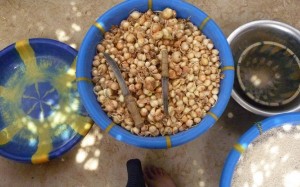 “Don’t buy any onions?” I asked. “But we’re making yassa. It’s an onion sauce. I can buy onions.”

“No,” they both insisted, “Jaba be soro yan.” Onions can be found here. I was buying dinner, but the women of my family were contributing onions from what they had recently finished harvesting. I was so touched!

On the Thursday before my birthday I bought all the vegetables at market, and Awa gave me a woven basket to keep them in until the feast on Sunday. It wasn’t more than two days before I started noticing a strange sour smell in my kitchen and then realized the tomatoes were starting to turn. Nasty, rotting tomato juice was seeping out of the bottom of the basket and white mold was starting to devour the less fortunate tomatoes. For my twenty eighth birthday, I would have rotten tomatoes for dinner. Mmm. I threw out the worst of them, but the Malians’ philosophy was to pick the mold off and cook the shit out of the tomatoes and never think twice about it. So that’s what happened with most of them.

Awa wanted me to buy fish because meat was too expensive, but Seydou reminded me there were still two chickens that had been given to me upon my arrival that I had yet to eat. So, those were designated as part of the feast as well. 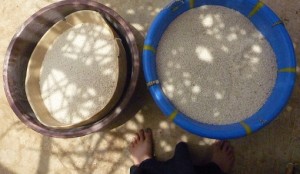 On Saturday, I went to my neighbor’s house to buy the rice. When relaying this story to a friend, I was asked, “How did you carry all that rice home?” Don’t worry, I didn’t! Two teenage Malian girls did. On their heads. Thank Allah for Malian kids…

My birthday itself was great. I spent the morning befriending Baniofla (it was my birthday on which she decided to be brave and walk with me to Dubala. It was my second gift, maybe even a little better than onions). Throughout the day, my family and neighbors came over to give me blessings to have a good next year. Birthdays aren’t generally known nor celebrated in my village, but my villagers somehow knew exactly how to make me feel loved on my day. 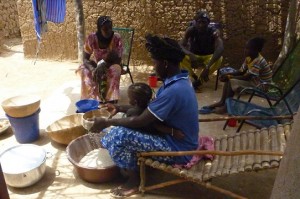 Around midday, Jelica, Jenaba, and Awa came over to start preparing. Jelica and Jenaba picked rocks out of the rice while Awa and I started mixing the dough for gateau. Awa brought over a furneau, the metal frame on which to rest a pot over a fire, and once a tray full of little dough balls were made, Awa got to work frying them in oil. When the rice was picked clean, Jelica and Jenaba joined us in rolling balls of dough. Meanwhile, the girls in my family were put to work at Dukurala peeling and susuing all of the onions. Seydou helped by coming over to make tea and chat.

In the evening, we cooked the rice and sauce at Dubala, and enjoyed the feast. Then, Awa, Jenaba, and my teenage girl sisters and cousins came over to my house to hang out. They bought boisson, powdered drink flavoring akin to Kool Aid and we chatted until around 11, at which point we were all exhausted. When everyone had left, I fell quickly and contentedly to sleep. It was a great birthday.

This entry was posted in Uncategorized. Bookmark the permalink.
← Baniofla and Her Terrible, No Good, Very Bad Introduction to a Toubab