← Tea and Traditions, Among Other Things    Onions and Small Friendships Make the Best Birthdays →

Baniofla and Her Terrible, No Good, Very Bad Introduction to a Toubab

Poor Baniofla. In all of her two and a half years, she had seen nothing so scary as a slight woman covered completely in light pinkish skin. And it was to her misfortune that such a woman arrived and insisted on living right across the widening from her house. Gone were the feelings of safety she’d felt living in the only village she’d ever known, each day predictable and consistent. In its place was only fear and the shame that accompanied that fear as all the others laughed and teased her for such feelings. How did they not understand the potential dangers of such a person whose skin turned out so terribly wrong? 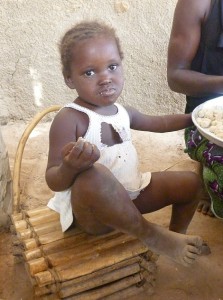 The first day of this woman’s arrival, Baniofla could sense the excitement in the air as everyone hurried to greet the newcomer. “Bougourie nana! Bougourie nana!” her older sisters and brothers yelled as they ran across the widening to the empty house that separated her house from Dukurala. Baniofla was intrigued, but not enough to leave her mother’s side as she finished up the day’s laundry. With the last of the clothes hung to dry, her mother reached down and picked her up. “Lets go greet Bougourie!” her mother said, and Baniofla was happy to see what the excitement was about from the comfort of her mother’s arms.

They walked across the widening and entered a small courtyard. For as long as she could remember she’d played around the outside of the compound’s mud walls, but never before been inside. She looked around as her mom shuffled through the crowd. Most of the neighborhood kids were there by the entrance, all their attention focused on the back wall, under the new gwa. She looked back in that direction, and saw many of the older men in village seated under the gwa. It took a moment, but then she saw it: seemingly a person, but not like any person she’d ever seen. This person had light colored pinkish skin and strange looking short hair. It was seemingly a girl, though she was wearing pants and no head scarf. Her mother continued walking closer and Baniofla’s grip got ever tighter around her mother’s neck. “Bougourie, i ni ce!” her mother greeted as they approached, and then the white face looked up and spoke back in a strange accent unlike any she’d heard before. “Hawa! Nse i ni ce,” the voice reciprocated the greeting, and Baniofla shivered. She knew her mother’s name!

She could feel the fear overtaking her body, all the way in her toes, and pulsing through her clenched finger tips. She couldn’t breathe, but had managed to stay silent, perhaps unnoticed, until the unimaginable happened. Her mother finished greeting Bougourie and then, with no warning, thrust Baniofla forward, telling the woman Baniofla’s name. The woman answered back happily, but she couldn’t hear a word of it. She could feel her body shake and could hear only the screams coming loudly from the center of her body. She turned away, burying her face in her mother’s shoulder. Tears collected in her mother’s shirt and she could feel her mother’s footsteps leading her away, back home, back to safety.

The rest of the day she tried to carry on as normal, playing with her siblings and cousins, but she couldn’t help feeling like something was terribly wrong. As night crept closer, she couldn’t get the image of that horrible light colored skin from her head. That night, she lay on the mat under the mosquito net wedged between her mom and her sisters, and each time she closed her eyes, the day’s big event replayed in her mind. Her body would again fill with fear, and each time she would clutch her mother’s side, whimpering out tears, until her mother soothed her quiet again.

Over the next few days, it got worse. Bougourie was all anyone would talk about. Her siblings all spent time playing at Bougourie’s house, leaving her alone because she refused to go back. They talked about a strange metal toy that could stretch to be taller than anyone or contract to fit in your hands, but Baniofla wasn’t fooled. Worse, nowhere was safe from an unexpected visit from the evil light skinned one. One evening, walking with her brother Sada to Dubala in search of leftover toh, she looked up to find Bougourie sitting next to the women pounding millet outside. She froze in fear, her screams filling the air, until Sada lifted her and carried her back home. Another morning, she was eating her porridge for breakfast, like every other morning, and Bougourie strolled through her yard, greeting her family. She had no choice but to drop her spoon and run inside for safety.

Everyday, she found Bougourie in some unexpected place, and everyday through her screams she could hear the laughter of whoever was around, teasing, urging whoever she was with to let Bougourie hold her or to have Bougourie take her to Ameriki when she left. As the days passed, though, nothing terrible happened. She started being jealous that all the other kids spent time at Bougourie’s house. Sitting at home with her older sister Katou, Baniofla decided to find out what they liked so much about going there. “Lets go to Bougourie’s house,” she told Katou, and soon she was on Katou’s back entering the tiny courtyard again. Bougourie sat back against the mud wall under the gwa, and as they entered, she said “Eh? My friend Baniofla came over? Good morning!” Baniofla peered around at Bougourie, but at the sight of her, she was still overwhelmed with fear and buried her head in Katou’s back, muffling her screams. “Don’t cry!” Bougourie insisted, but it was too late.

More and more often, Bougourie sat at Dubala in the evenings while the women susued. Baniofla came to expect it, and would hide her face in Katou’s neck as she rode piggyback to Dubala. She realized that so long as she didn’t look, she could exist in the same space as someone with terrible light skin. The others would urge her to look, and Bougourie kept insisting they were friends, but Baniofla stayed focused, and kept her eyes trained on Katou’s neck.

Until one day she didn’t. Bougourie was there, as usual, and Baniofla had come with Katou so she could susu the breakfast millet for the morning. Katou had gotten a small bench so Baniofla could sit behind her, out of sight of Bougourie, while she susued. Bougourie greeted as usual, insisting they were friends. Then she said, “Huh, Baniofla, tiga,” and stretched out her hand offering peanuts. Baniofla was hungry, and upon Katou’s suggestion, she peered out from behind Katou’s tafe, or skirt, and accepted the peanuts from the strange light colored hands. When she was finished, those same hands offered more. Someone so generous with peanuts must not be so bad, she figured, and peeked out more and more from Katou’s skirt. The more she looked, the less scary Bougourie seemed. Her skin was still wrong, but she looked more like a person and less like a monster the more Baniofla watched her. Perhaps they could be friends after all.

The next morning, Baniofla was playing in the widening with the neighborhood kids when Bougourie came out for her morning walk. She stopped to greet her neighbhor BaJeneba, and all the other kids ran over to say good morning. Baniofla decided to join them. “Eh? Baniofla? You came to say good morning to Bougourie, did you?” BaJeneba said as they approached. Baniofla smiled, but said nothing as the adults shifted their attention back to each other.

“Where are you going?” she heard BaJeneba ask Bougourie, and then Bougourie’s response, “Just out for a walk.”

“Yeah, lets go for a walk,” Bougourie said, her light skinned face peering down with a smile. Still saying nothing, Baniofla swallowed hard and did what she knew she had to do. She took a step forward and reached out her tiny hand. White fingers clasped around it and together they started walking down the path towards Dubala. With each step, she could feel it getting easier, and by the time they reached Dubala, she knew she wasn’t scared anymore. Aunt Jelica was susuing, and Bougourie grabbed a small bench to sit and chat as usual. Feeling brave, Baniofla grabbed a bench, too, and sat right next to her. “Baniofla,” Aunt Jelica said, “Aren’t you scared?” But Baniofla said nothing. When Bougourie went to leave, she reached out her hand again, and let the white fingers clasp around hers. Not even a pitter of fear danced in her stomach, only pride, as she walked home with her new friend.

This entry was posted in Uncategorized. Bookmark the permalink.
← Tea and Traditions, Among Other Things    Onions and Small Friendships Make the Best Birthdays →